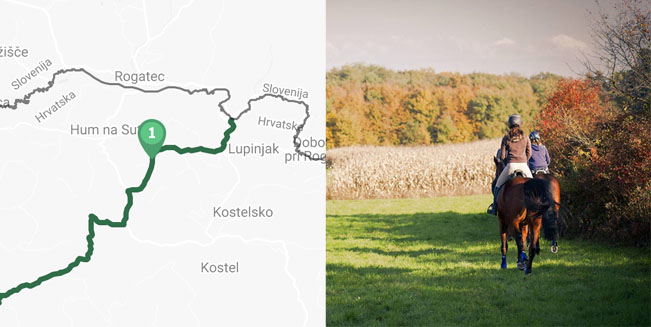 The trail starts at the entrance to the forest in the south direction. Shortly after the beginning, there is the St. Vitus church on the left. The trail leads through the village of Klenovec Humski and after approximately 800 m, the trail turns right down the hill and then continues mostly to the west. Over the next 7 km, the trail passes through picturesque villages scattered across the hills, cultivated fields and some groves. Near the village of Vrbišnica, one might come across a lake and seasonal stream Poljanovac. After leaving the village of Kanić, the trail starts climbing and on the left, there is the mountain Druškovec Gora with two peaks: Korekov breg (472 m) and Žolekov breg (499.2 m). After that, the trail leads through the village of Košenine with the old quarry on the left side of the trail.

In its last section, this trail turns right towards Bojačno and Luke Poljanske and then again, it takes a sharp turn towards north to Harina Žlaka at the border with Slovenia. If desired, it is possible to cross the state border and visit the Olimia spa in Slovenia. After that, the trail leads to the end of the village of Bojačno and turns to the village of Jazbina. In Jazbina, the trails turns again to the right towards south, leading through the forest area and macadam road in the east direction and reaches the village of Hum Kosnički where on the left, there is the St. Magdalena church. Hum Kosnički is the last village before the final destination, the castle of Veliki Tabor and the wine cellar.

The Krapina-Zagorje County is situated in the northwestern part of the Republic of Croatia and it belongs to the area of central Croatia. It is a separate geographical entity, delimited in the north by the peaks of the Macelj and Ivanščica mountains and in the southeast by the Medvednica mountain, also called Zagreb’s mountain.